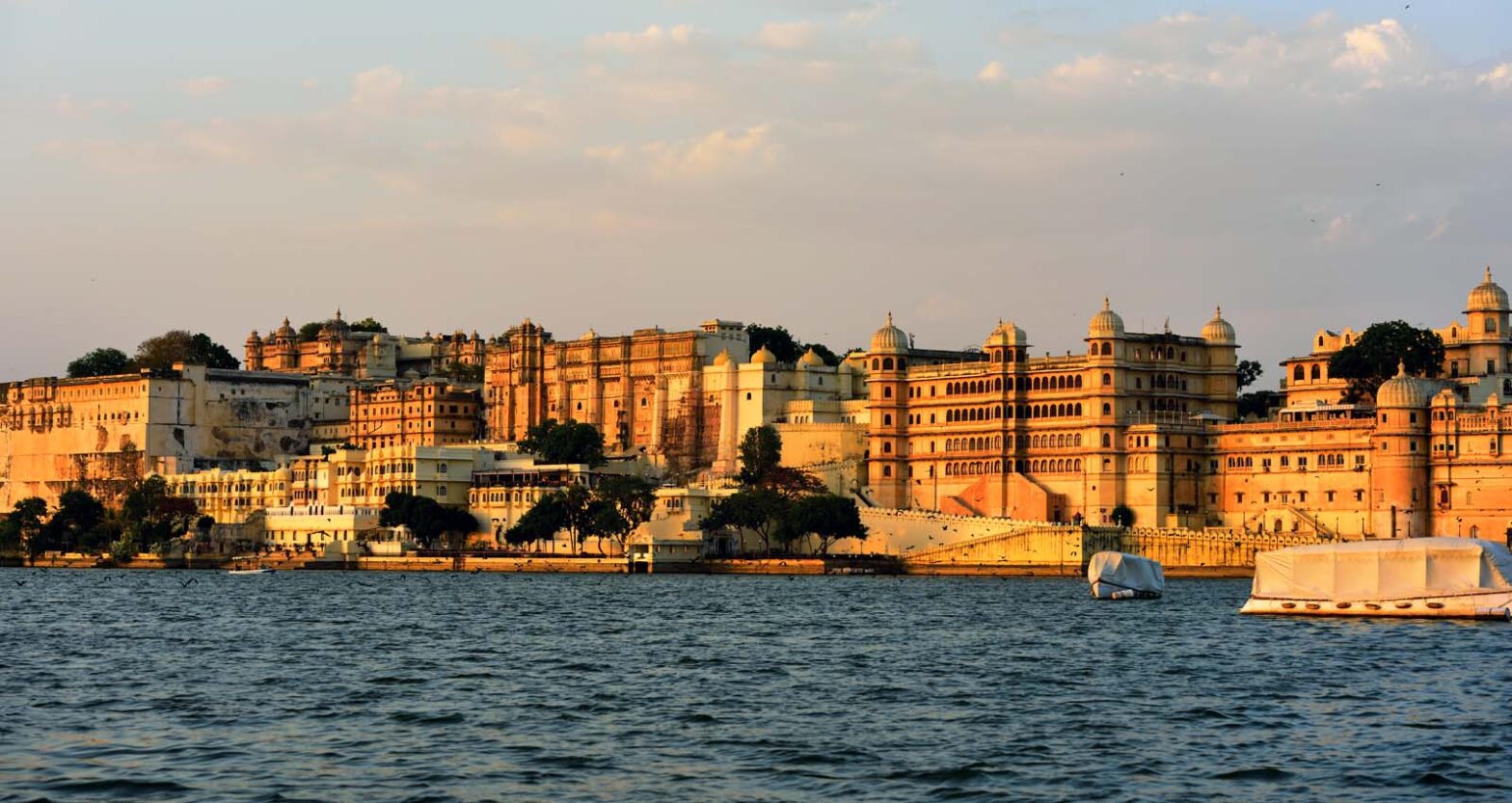 Udaipur – “The Venice of India”

Mewar region of Rajasthan is characterized by gusto, bravado, and people with some real fiery lifestyles and cultures. And the jewel of Mewar is the City of Lakes-Udaipur. A visual treat, a palatial skyline, and some romantic sunsets around the lakes are some of the breathtaking sites to behold. It was rightly used as backdrops for some high-budget Bollywood and Hollywood movies for a very long period. Many people consider this capital city of Mewar to be too overcrowded or too touristy, but for the love of some jaw-dropping backdrops, we absolutely recommend Udaipur, and Frontiers Beyond will definitely give you a reason why Udaipur should be on the list of any traveler making their way into the hearts of India.

Udaipur City Palace-the shining star of the Mewar dynasty
This grand structure is quite unmissable when in Udaipur. Situated right by the sides of the serene Lake Pichola standing with absolute elegance and authority, the towering palace has both guided tours and audio-led self-guided tours for its tourists. And oh my! You shall get some choices to be spoilt with for entering the premise. There are combinations of palace tours and that is one of the reasons why some History enthusiasts spend a few days exploring just the palace itself. You can combine the crystal gallery with the main palace, or the museum with the main palace. At the entrance, you can also get the choice of booking a boat ride in the Pichola. Do pick the time when you can view the sunset.

And do not forget to carry your student id if you are a student to get better discounts. Finally, if you are spoilt for choices, then just choosing the Palace is also a very good investment for a day. As you walk through a rather mundane-looking gate into the worlds of the Mewars, you will be surprised to see the regality that waits inside. Flags fluttering in the royal skies and some great archaic looking warfare weaponry displayed for bedazzling the onlookers.

If you want to see how the Mewaris maintain their gardens, then the museum garden will leave you in for some pleasant surprises. This 400-year-old palace has contributions from several Rajput Kings of the Mewar dynasty. Nestled in the Aravalli Mountains and still standing the test of time and harsh weather, it’s an architectural wonder. The city is named after Maharana Udai Singh, who had taken the blessings of a hermit and planned the palace as per his guidance. His son Maharana Pratap took the reins and he went down the pages of History as the most remembered brave Rajput king who lost his life while battling the great battle of Haldighati against the mighty Mughal Ruler Akbar in 1576.

Be it walking across the Amar Vilas or stepping into the Badi Mahal, there is no dearth of beauty in this palace and hidden stories at each turn of this flam buoyant Royal legacy. The Fateh Prakash Palace has been already turned into a classy luxury hotel for those who want to taste the royal life for some time. You can also step into the Krishna Palace if you like gaping into art galleries. We can go on for one section or the other inside the palace and we can guarantee you that we shall be able to help our customers choose sections and combinations that are best suited as per their taste, time and budget.

Lake Pichola, the scene for all the magnanimity of the city
This is a man-made lake, but this wonder has been the central idea for Maharana Udai Singh to plan his entire city around this.  The Lake Palace Hotel shines bright among all the palatial constructions around the lake. Generations of the Udaipur Dynasty decided to build beautiful and long-lasting structures around the lake that glimmer and cast their ephemeral reflections in the tranquil waters of the lake. As you finish your palace tour, we can guarantee you that a boat ride in the lake can be a perfect way to end the day.

The solitary Jag Mandir
In Hinduism Mandirs are temples that house the idols of deities and are revered by worshippers. But Jag Mandir, is not really a temple but a palace built in an island in Lake Pichola. The palace is very special since it once hosted the Mughal emperor, Shah Jahan. Used by many generations, the Rajputs use to hold grand celebrations on the premises of Jag Mandir many years ago. And today, of course, all the palaces and hotels still hold the same culture of hosting Royal families, and celebrities including from the sports and film fraternity. They choose the grand palaces and forts of the various cities of Rajasthan to host their destination weddings which are indeed some glamorous affairs.

The beautiful Elephant statues will greet the guests honorably into the garden courtyard. Do not forget to take some pictures around the open verandahs that look over the lakes as the sun sets with all its sheen before draping the city into natural darkness.

Bagore ki Haveli
Havelis are smaller than palaces, but in no way less charming. Another beautiful structure in Lake Pichola. To enjoy some cultural experience out here, we really recommend the Dharohar dance show. A beautiful sight to behold with all the dash of colorful attire, ornaments, interesting props, and amazing acts which are no less than miracles unfolding in front of your eyes.

Vintage Car Museum of Udaipur
For all the car aficionados out there, this stop cannot be missed. Gulab Road of Udaipur has opened its doors to boast its beautiful vintage car collection of the Maharana of Udaipur. The staff of the premise is so welcoming that they are extremely willing to walk you through the engineering wonders of the old world when Indian Kings left no stones unturned to bring German, American, or British engineering excellence to the country to satisfy their love for vehicles. Rolls Royce, Mercedes, Rylie Jeep, the Austin, all clubbed under one shed.

Sahelio ki bari (The Garden of Maidens)
Royal women enjoyed moments away from the regular administrative and political affairs governing the kingdoms-but they would not do it alone. Rana Sangram Singh grandly built this beautiful oasis for his queen so she could spend some fun moments with her maidens. This is a verdant orchard nestled on the banks of the beautiful Fateh Sagar Lake of Udaipur. The queen was accompanied by 48 maidens at the time of her wedding to the Rana and the King designed this garden exclusively for her. Be it walking around the orchards or enjoying the cool waters of the fountains; everything around this place will surely make you wonder- what a life!!

While in Udaipur you really cannot miss a shopping spree escape to the Hathipol shopping area. Even if you do not wish to buy anything, a walk through the colorful streets will surely entertain your eyes. Be it those shiny Jutis (Shoes), handcrafted bags and bed covers, or some traditional clothes like the locals, the sweet vendors will pour their hearts out to show you their collections without an ounce of misery. And you can even click pictures if you think you do not have enough space in your luggage to pack them all.

And no Udaipur trip can be complete for non-veg lovers without a taste of the Laal Maans (a red meat mutton curry cooked in delicious herbs). You can go to Laal Bagh which is like 15 mins away from the old city to taste some authentic mutton curry. For some more local trivia, you must trust the team of Frontiers Beyond to guide you through those gastronomy lanes and give you a taste of both vegetarian Daal Baati Churma or the non-vegetarian delicacies for which Mewar is famous.

Udaipur is a land of festivities and the locals know very well how to cherish and celebrate lives royally. As such all the seasons are heavily laden with some or the other local celebrations. But upcoming festivities to keep an eye on our Dussehra which is a 10-day festival and Diwali in October which is the beautiful festival of lights.

Some of the best festivities that have been celebrated exclusively in Udaipur are the Udaipur Lake festival which celebrates the beautiful lake Pichola and Fateh Sagar Lake. From floating markets to feisty boat racing games, it’s a fun-filled festival attended not only by the locals and the national tourists but also by international tourists in great numbers.

The other upcoming festival, the Udaipur music festival which will be mostly held in Feb 2023 will be a paradise for music lovers. More than 150 musicians flock to the city and most of them perform for a continuous 3-day extravaganza. The events are not held in one single location but spread across the city but mainly concentrated around Fateh Sagar Lake.

So, pack your bags to not only see and experience the above but a little more with the team of Frontiers Beyond if you really want to stand out in the crowd with your Udaipur travel itinerary.

It is a pleasure working with you, thank you for a

Season's Greetings...!! During all this pandemic,

Badrinath - A perfect blend of divinity and sereni

Pilgrimage In Himalayas - Experience a Life-Changi

The Best View Comes After The Hardest Climb. . . #

Live in the present and make it so beautiful that

This error message is only visible to WordPress admins